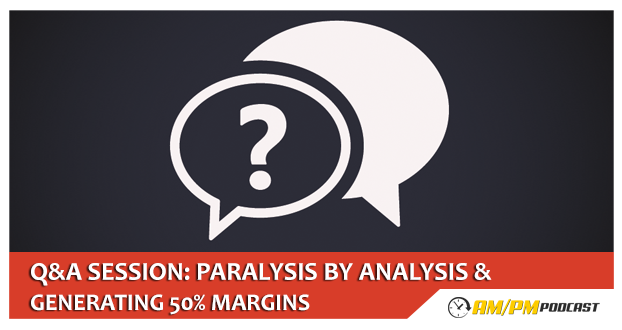 Q&A Session: Are Competitive Analysis Software Tools Causing Paralysis by Analysis & Is It Possible to Sell On Amazon with 50% Margins – EP39

MANNY: Let’s get to the first question of our Q&A.

GUI: The first question is from Jason via our website (recording).

Q1: “I’m a software designer, a video game designer, and for many years I’ve adopted the saying that having ideas is easy, it’s the execution that’s hard – it’s easy to come up with ‘wouldn’t it make a great game if…’, but actually making that happen is where the success comes from. With the advent of tools, you can easily search for things with under 50 reviews or selling for more than $300 a month, within a $20-$50 price range. Product sourcing is important, how much do you think decision paralysis affects people and keeps them from preceding. In some ways, any product meeting that criteria would be successful if their ability to follow through was there”.

MANNY: The software tools out there can tell you fairly certainly what products meet your minimum criteria but how do you know when to move forward? How much does this decision when you have all these options, paralyze people from moving forward? I had 15 different products I had to launch and you just get confused and you don’t take any steps. You have to pick one product that makes the most sense, the one with the higher selling point and the one that has a more specific market that wouldn’t be reached normally and how unique you can make the product to everything else and how likely you’d be to expand a product into a brand. If it’s your first product, building a brand is not that important but when you want to work long term and expand your products, that’s something to look at.

GUI: I don’t think information overload and analysis by paralyses is real, especially information overload, I’ve never seen anybody walk into a library and freeze – there’s so much information and nobody freaks out. You’re going there to find a specific book and take it. While you’re utilizing the tools, have a focus and goal in mind and work towards that goal. Be able to put those blinds on to keep away the shiny objects who stop you from reaching that goal.

MANNY: If you set small goals initially and you reach that goal, you can always go higher and bigger, just to show you can do this. Let’s get to the second question.

GUI: This question is from Gui.

Q2: You mentioned 50% profit is not realistic in one of your periscopes episodes. In the past I’ve sold with over 50% margin, some people do get those type of margins.

MANNY: People that claim 50% and are selling big numbers are typically full of bull. If you have the right product you can do it. When I’m talking about 50% I’m talking about all fees, the manufacturing cost, the shipping cot, the FBA fees, the referral fees from Amazon, the PPC fees etc. I’m also talking about private label, not retail arbitrage where you might be able to control the profit. Let’s say you shoot for a $40 product; you have to keep your fees at or below $20 to keep that 50% margin and we know that the referral fee on a $40 product is going to be about $6. Chances are that the FBA fee is going to be somewhere around $4. That eaves another $10 for the manufacturing and shipping of that product, the packaging and any PPC that you’re going to spend. Then you’re at 50% profit margin but it’s not common.

GUI: I’ve done that with arbitrage and that’s quite common but most people inflate their numbers, most people paint a half picture. If you do everything like you just said, you might be able to get to that point. It’s doable but it’s not something that people should be shooting for. If you’re shooting for %20, %25 profit margins, you’re still going to have a healthy business and your options are going to be a lot more.

MANNY: I don’t think I’ve ever said anybody who does %50 is flat out lying – the majority of people claiming that are probably not being as truthful as they claim to be. Let’s say I’m selling one unit a day with no costs, I can have a 50% margin on that product but what’s the use if there’s no volume? There’s a different between doing 50% margin and doing 50 units a month and having 50% margin and doing 9000 units a month. In order to get to that kind of volume, you’ve got to spend to get that product on PPC and on the first page. I very often show my daily revenue numbers and people always ask how much of that is profit – it’s somewhere between %20 and 30%.

GUI: What is the lowest margin that you would consider? Is there a margin that’s too low for you?

MANNY: It depends on a number of factors. For me, it comes down to cash flow. Let’s assume I have $100 000 and that’s all I got to spend for the year. If one half goes to a product that gives me a 5% margin and the other half that gives me %30, wouldn’t it be better to take the whole thing and apply it to the product that’s giving me the higher return? I would cut the lower one as it is a cash flow issue.

GUI: Let’s say you’re getting %10 on one and 30% on the other but you’re selling the 10% one three times faster then you’re getting those profits faster so your volume is higher so you’re multiplying your money faster?

MANNY: Again, if the cash flow isn’t an issue. If the price point is exactly the same and you can afford to buy three times as much inventory at that price to get to that level, absolutely. I would take a look at the float and which one makes me more money over a month.

GUI: There’s no one answer for every question – there’s so much strategy in this business and that’s what separates the successful people from the wannabe’s.